You’ve probably seen a hookah device, even if you didn’t know it. If there’s a movie set in the Middle East, there’s probably a scene with men sitting around a large device, each inhaling out of or holding a large hose. While it’s a lazy Hollywood stereotype to some extent, hookahs are indeed popular in the Arab world, Iran, Israel, the Mediterranean, Pakistan, and the device’s native India.

It’s easy to understand why they’re popular: hookahs are great for enjoying different mixtures and flavors with other people. The hookah is a very old device, too, and its enduring qualities have found their way into modern vaping devices. Here in Canada, you can easily set a hookah up for yourself to enjoy new flavors and the

How Does A Hookah Work?

A hookah, traditionally, is a larger water pipe device. Burning tobacco sits in a bowl, and the smoke drawn from it goes through a water chamber and into the hose, with the user pulling it out with each inhale. The bowl, plate (to collect ash), body, water chamber, and hose all make for an impressive device, but it’s not one that’s very portable. 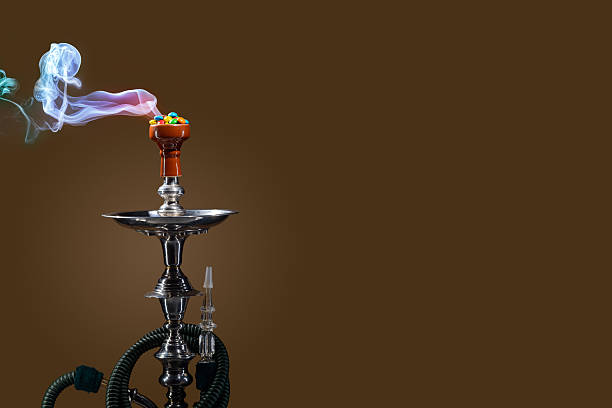 Hookahs can have a number of different hoses attached to it, making it a great device for social smoking. Usually, the number is around four or five hoses, but it can be as little as one, too. A hookah with a number of different hoses should have an autoseal on the hose attachments, so that when one person is drawing smoke, they aren’t also drawing air out of your hose, too, which would weaken the smoke. If there is no autoseal, then the other users have to remember to block their mouthpieces with their thumbs.

The basics of a vape pen or device are similar to that of a hookah, albeit in a much smaller, more portable form. The vaping e-liquid is very much like what is smoked from a hookah, as the water vapor that is created is much easier on the lungs than tobacco smoked from a cigarette or regular pipe.

Is Hookah Safer Than Other Smoking Devices?

A lot of smokers who use a hookah believe it to be safer than cigarettes and vaping devices, as they believe the smoke is “filtered” through the water. This isn’t true. While it doesn’t deliver the same chemicals to the body as a cigarette, it still contains nicotine and other toxins. Because of the ease of use and the social aspect, it can actually become as harmful as cigarettes – if you’re drawing smoke from it for an hour at a time, you’re inhaling more outside chemicals than you would take a draw from a conventional cigarette.

Regardless, hookah devices are a great way to enjoy flavored tobacco with a group of people; one just shouldn’t think that they are avoiding more nicotine and chemicals by enjoying it over other smoking devices. Vaping can provide the smoothness and ease of use in much the same way, without the large, cumbersome device or the high amount of chemicals, and can be used privately.